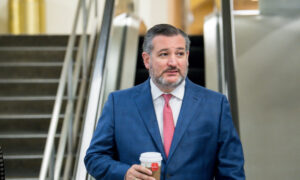 Sen. Ted Cruz (R-Texas) has introduced a bill that would block the federal government and public schools from imposing COVID-19 vaccines on children.

Casting the issue as a fight between parents and schools, Cruz said that the federal government has “repeatedly ignored medical privacy rights and personal liberty by pushing unlawful and burdensome vaccine mandates on American businesses.”

Now, he argued, the administration is planning on “pressuring parents” into accepting vaccine mandates for school children “all without taking into account relative risk or the benefits of natural immunity,” according to a statement issued by his office last week.

The measure would specifically block the federal government and any recipient of federal funding from the Department of Health and Human Services (HHS) and Centers for Disease Control and Prevention (CDC) from mandating any individual aged 18 and younger to show proof of COVID-19 vaccination. Any school that receives certain types of federal funding will have it stripped if it mandates vaccines, Cruz said.

Cruz filed the bill after CDC Director Rochelle Walensky approved the Pfizer-BioNTech vaccine to be administered to children aged 5 to 11. It previously approved an emergency use authorization for children aged 12 to 15.

Before Walenksy’s approval, a CDC advisory panel said that the benefits of vaccinating the age group outweighed the risks, including myocarditis, or inflammation of the heart muscle. Before that, the U.S. Food and Drug advisory panel in late October voted to recommend that children aged 5 to 11 should receive the COVID-19 vaccine, with some panel members saying the vaccines would reduce the hospitalization rate.

Gov. Greg Abbott, a Republican, issued an executive order earlier this year prohibiting vaccine and mask mandates from being required as a condition for employment or service.

A number of studies have shown that children have an exceedingly low chance of dying, being hospitalized, or dying from COVID-19, the disease caused by the CCP (Chinese Communist Party) virus. ‘We’re Nowhere Near a Wake-Up Call’: Michael Pillsbury on the CCP’s Plans to Surpass the US Facts Matter (Nov. 6): Vaccine Mandate Protesters Explain Why They Would Rather Lose Their Jobs Than Get the Shot Dr. David Jeremiah: Why Socialism Is Anti-Family and Anti-Faith

Ted Cruz: If Republicans Take Back the House, Biden Could Be Impeached