Are China–US Relations Escalating Into a Cold War? 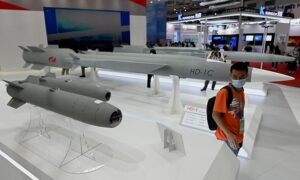 General Mark Milley considered China’s alleged hypersonic weapon test comparable to the “Sputnik moment,” a pivotal event during the Cold War with the Soviet Union. His remark signals an escalation in military competition between the two countries, and the potential existence of a China–U.S. cold war. Will the United States respond to this strategic national security crisis at a new level?

On Oct. 27, Milley, chairman of the Joint Chiefs of Staff, told Bloomberg that the Chinese military had recently conducted a test of a hypersonic weapon system into space. Milley said that it is a “very significant technological event,” very close to the “Sputnik moment,” and “has all our attention.”

On Oct. 17, The Financial Times reported that the Chinese military launched a rocket that carried a hypersonic glide vehicle, which flew through low-orbit space before cruising down toward its target, according to anonymous sources.

“The missile missed its target by about two-dozen miles,” they said.

Two of them said, “The test showed that China had made astounding progress on hypersonic weapons and was far more advanced than U.S. officials realized.”

However, the New York Times published an article on Oct. 20, citing some experts’ doubts about the report. “The U.S. military unit that reports on orbital events had made public no information on an August launch by China that matched the reported claim about a weapons test,” and “some descriptions of the test launch have been alarmist.”

It’s not surprising that the New York Times tried to downplay the impact of The Financial Times’ report on the rocket test. This news is related to what could be the beginning of a China–U.S. cold war, but President Joe Biden refuses to acknowledge the existence of a cold war. Instead, he calls the bilateral relations a “competition.” During his first United Nations address on Sept. 21, Biden said, “We are not seeking a new cold war or a world divided into rigid blocs.”

To Biden, it seems that as long as the United States says it is not in a cold war, there is no China–U.S. cold war developing. However, Milley made it clear that China’s hypersonic weapon test is very significant, and since Biden has said he has “great confidence” in Milley’s leadership, this recent comment undoubtedly put pressure on the president to recognize a cold war exists.

The Sputnik Moment Marked the Time When the Cold War Escalated

The U.S.–Soviet Cold War started after the soviets stole U.S. nuclear weapons secrets and completed the development of the atomic bomb. A nuclear-capable military system became the focus of arms expansion on both sides, in addition to developing medium-range and even long-range missiles. Meanwhile, the United States had failed twice in launching satellites during the arms race.

When the Soviets successfully launched the first artificial Earth satellite, Sputnik 1, and it entered orbit on Oct. 4, 1957, U.S. policy makers, the military, and intelligence were taken by surprise. The American long-range missiles and military defense were falling behind.

The Sputnik moment became the Sputnik crisis, a period of public shock in America about the surprising technological gap between the United States and the Soviet Union. The U.S.–Soviet Cold War escalated to a highly intense level, in which the United States adapted multi-directional long-range missiles and military expansion preparations for space competition.

In an urgent response within two days, U.S. experts calculated Sputnik’s orbits and the Defense Advanced Research Projects Agency (DARPA) was created in February 1958 with the mission to make pivotal investments in breakthrough technologies for military advancement. On July 29, 1958, President Dwight Eisenhower signed The National Aeronautic and Space Act of 1958 into law and promoted the first manned satellite program—Project Mercury—and the establishment of grants for contracted research and proposals. The United States also developed the Navy’s first submarine-launched ballistic missile, the Polaris. After making those improvements, the United States took a dominant military position throughout the remainder of  the Cold War.

Does the Sputnik Moment Compare to China’s Hypersonic Weapon Test?

During the first half of 2020, Beijing staged a series of public nuclear threats toward the United States: In January, a Chinese naval fleet began exercises involving assault activities south of Midway Island, presumably an act of aggression; in March, Beijing announced its nuclear-powered ballistic missile submarine fleet had secured its maneuver territory in the artificial island fortresses of the South China Sea; in June, China successfully launched the last BeiDou satellite in its navigation system, a strategic deployment that could enable precision nuclear strikes across the United States.

Furthermore, Beijing continued its showdown in the South China and East China Seas this April by sending its submarine fleet into open waters.

So far, China’s military actions have demonstrated its cold-war style nuclear threat to the United States. Even though technically its conventional military style was adopted at the end of World War II, the fact of the matter is China has posed a nuclear threat and started a cold war, which can’t be ignored. Biden’s excuse of “not seeking a new cold war” only shows his weakness.

During the U.S.—Soviet Cold War, Americans awoke after the Sputnik moment and defeated the Russians, with its quick response in military strategies and technological development. The question is how will the United States react now to what appears to be a second Sputnik moment.

Biden’s attitude is surely important, but his diplomatic activities in Europe, the G20 in Italy on Oct. 30 and 31, and at the COP26 climate summit in Scotland on Nov. 1, kept him from paying attention to the warning of the second Sputnik moment.

Pentagon spokesman John Kirby also played down this new nuclear threat, following Biden’s policy, and refused to label the test as a Sputnik moment. He said in a press briefing: “This is not a technology that is alien to us that we haven’t been thinking about for a while,” and “It’s not just our own pursuit of this sort of technology, but our mindfulness that we have defensive capabilities that we need to continue to hone in to improve.”

However, Ambassador Robert Wood, the U.S. representative to the Conference on Disarmament, said that the United States is “very concerned by what China has been doing on the hypersonic front. We just don’t know how we can defend against that type of technology. Neither does China or Russia.”

Wood added, “If you’re a country that’s the target of that, you’re going to want to figure out a way to defend yourself from that, … And so we start looking at what other applications and defensive applications can you bring to hypersonic technology … and so that continues … to accelerate the arms race.”

For many years, U.S. military leaders have been warned of the hypersonic missile, a nuclear-capable weapon flying more than five times the speed of sound, developed by the red powers.

In 2018, General John Hyten, the outgoing vice chairman of the Joint Chiefs of Staff, had already warned, “We don’t have any defense that could deny the employment of such a weapon against us.” He believed the response should include “advance missile defense forces and capabilities” and “the capability to defeat adversary missiles before they launch.”

As early as 2011, the Department of Defense had already produced a hypersonic prototype, but the Pentagon in the Obama era determined that this technology would accelerate weaponizing space, and stopped the development of hypersonic aircraft, while Russia and China have both engaged in aerospace militarization and hypersonic system development.

Washington was forced to recover its future combat system.

He said, “The U.S. is aiming to field conventionally armed boost-glide hypersonic missiles by 2025.”

White also said his agency is working to ensure that the United States is well prepared to defend against adverse hypersonics by developing offensive strike capabilities, and also a defense against hypersonics during the launch, the glide phase, and the final phase interception.

More importantly, will Biden continue his ostrich policy in the U.S.–China relations?

When the first Sputnik moment occurred, then-President Eisenhower’s firm anti-communist stance, the young President John Kennedy’s firm support of the policy, and the defense R&E saved the United States. Biden, on the contrary, with his socialist leanings, cares more about the climate issue. What he will do to deal with this second and critical “Sputnik moment” is what people care more about.