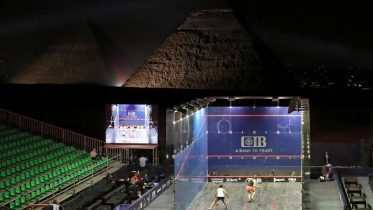 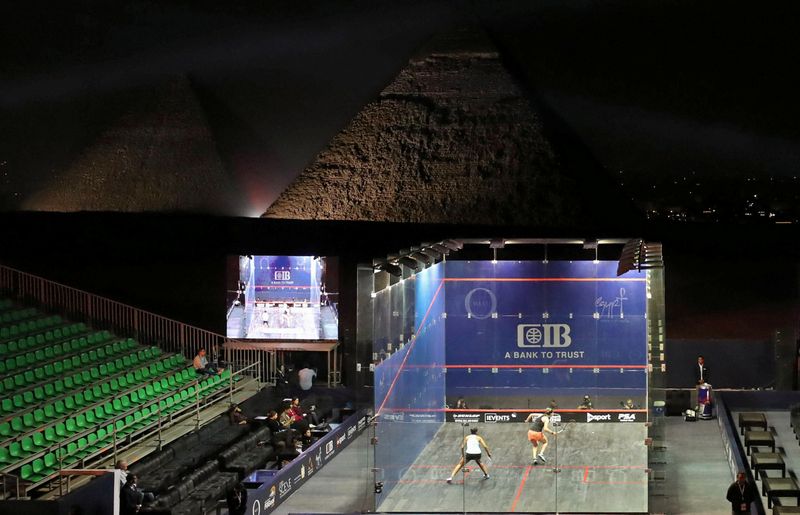 FILE PHOTO: A general view of a squash match in front of the pyramids of Giza, during the Professional Squash Association (PSA) Women’s World Championship in Giza, on the outskirts of Cairo, October 26, 2019. REUTERS/Mohamed Abd El Ghany

(Reuters) – The men’s World Team Squash Championship in Malaysia has been called off due to concerns about the new coronavirus variant Omicron and visa issues for Israeli athletes, the World Squash Federation (WSF) said.

The tournament was set to take place in Kuala Lumpur from Dec. 7-12, after having been moved from Tauranga, New Zealand in May due to the COVID-19 travel restrictions.

The identification of the Omicron variant has prompted several countries to impose travel bans which, the WSF said in a statement https://www.worldsquash.org/wsf-mens-world-team-squash-championships-cancelled, had raised concerns that some athletes would be unable to travel to Malaysia.

The global governing body added that the possibility that not all teams would be allowed to enter Malaysia due to visa issues contributed to the decision to call off the tournament.

Malaysia and Israel do not maintain formal diplomatic relations and travel to Malaysia with an Israeli passport is not permitted without written permission from the Malaysian Home Ministry.

WSF President Zena Wooldridge thanked the IOC and Malaysia’s Olympic Council for their “unwavering efforts to influence the highest authorities of Malaysia to ensure the ability of all participating teams including Israel to enter Malaysia and compete … .”

Malaysia’s policy on Israel has led to the relocation of several sporting events. In 2019, the country was stripped of hosting rights https://www.reuters.com/article/us-paralympics-meeting-idUSKCN1PL09K for the World Para Swimming Championships after refusing to allow Israeli swimmers to compete.

(Reporting by Aadi Nair in Bengaluru; Editing by Peter Rutherford)