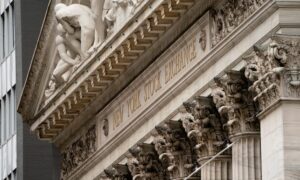 Omicron has gained a foothold in Asia, Africa, the Americas, the Middle East, and Europe and has reached seven of the nine provinces of South Africa, where it was first identified. Many governments have tightened travel rules to keep the variant out.

“The top issue is still this whole Omicron variant. There are enormous amounts of uncertainty there,” said Randy Frederick, vice president of trading and derivatives for Charles Schwab in Austin.

“Volatility means big moves in both directions and we have had a lot of up days and a lot of down days that are both very sizable here just in the last week … The market is a bit treacherous.”

The Labor Department said U.S. nonfarm payrolls increased by 210,000 jobs last month, well below the 550,000 jobs economists polled by Reuters had forecast, but the unemployment rate plunged to a 21-month low of 4.2 percent, suggesting the labor market was rapidly tightening.

“On the surface, the numbers came in disappointing because they did not match expectations, but it was not a weak report,” said Kevin Flanagan, head of fixed income strategy at WisdomTree Investments.

The data caps a turbulent week as investors assess the implications of the Omicron variant and what that means for growth, inflation, and ultimately central bank policy.

Markets were also digesting comments earlier in the week from Federal Reserve Chair Jerome Powell, who said U.S. central bankers in December will discuss whether to end their bond purchases a few months earlier than had been anticipated.

The dollar rose after initially falling after the jobs report.

Oil prices climbed after the producer group OPEC+ said it could review its policy to hike output at short notice if oil demand collapsed due to a rising number of pandemic lockdowns.

By Lewis Krauskopf and Sujata Rao