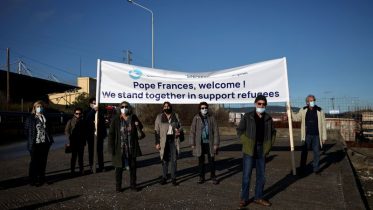 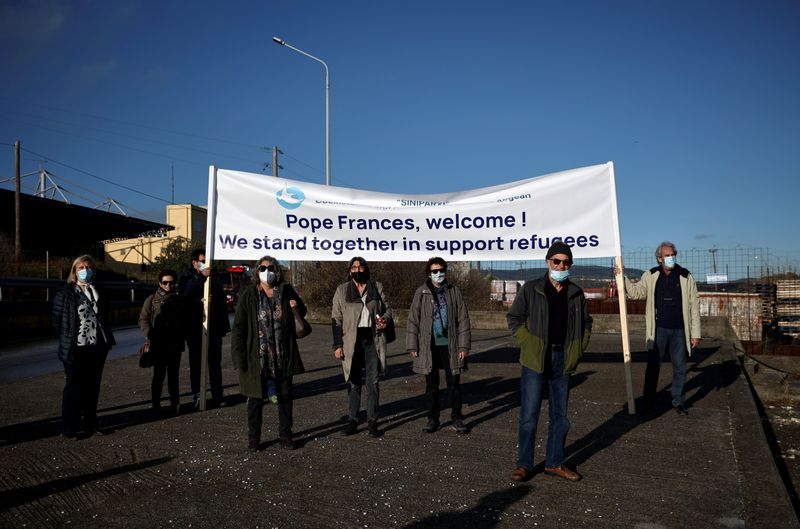 People hold a banner near the Mavrovouni camp for refugees and migrants before the visit of Pope Francis, on the island of Lesbos, Greece, December 5, 2021. REUTERS/Alkis Konstantinidis

By Philip Pullella and Lefteris Papadimas

LESBOS, Greece (Reuters) – Pope Francis will travel to Lesbos on Sunday to meet asylum-seekers at a migrant camp there on his second visit to the Greek island that was at the forefront of Europe’s refugee crisis.

Francis is on a five-day trip to Cyprus and Greece during which he has highlighted the struggles of refugees and migrants, an issue that has become the cornerstone of his papacy.

On his previous visit to Lesbos in 2016, at the height of Europe’s migration crisis, Francis walked through the squalid and dangerously overcrowded Moria camp and famously brought 12 Syrian refugees back to Rome with him.

Moria, at its worst point the size of a town of 20,000 people, burned down last year after becoming a symbol of Europe’s stumbling response to a crisis that left much of the burden to be carried by small islands like Lesbos.

On Sunday, the pope will visit the temporary camp that was hastily set up after the blaze in a old army firing range, home to around 2,300 mostly Afghan asylum-seekers.

Dozens of police officers were deployed inside and migrants were queuing up to enter the tent where the pope was due to speak.

“The issue of migration cannot disproportionately affect the countries on the borders of the European Union,” Migration Minister Notis Mitarachi said on Sunday.

Greece, like other Mediterranean countries Italy, Spain and Cyprus, has long been the gateway into the European Union for people fleeing war, poverty or persecution in the Middle East, Asia and Africa.

While the number of people crossing to Greece from Turkey has fallen dramatically in recent years, the government, fearing a possible wave of refugees from Taliban-conquered Afghanistan, is hardening its migration policy. Public attitudes towards migrants have also become increasingly hostile.

Greece has come under fire from rights groups for building “prison-like” closed holding centres for migrants on five islands close to Turkey, including Lesbos, and for intercepting migrant boats at sea.

Ahead of the pope’s visit, about two dozen asylum-seekers, some of whom have been in limbo on Lesbos for years, gathered for Mass https://www.reuters.com/world/europe/pope-prepares-visit-greeces-lesbos-migrants-hope-change-2021-12-04 in a small Roman Catholic church.

“We hope that by this visit, maybe something can change,” said Landrid, a 42-year-old man who fled a separatist insurgency in Cameroon.

(Additional reporting and writing by Karolina Tagaris;Editing by Elaine Hardcastle)