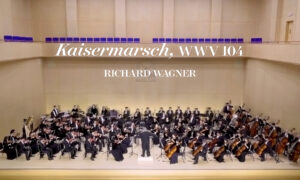 Despite having lived abroad for many years, Wagner had a singular love for his country, one that only grew stronger when the Ger- mans emerged victorious from the Fran- co-Prussian War. He composed the Kaiser- marsch (Imperial March) in 1871 to glorify the newly proclaimed emperor, Wilhelm I, who attended the piece’s premiere. A tremen- dously powerful composition, it was origi- nally scored for military band with a choral finale. But Wagner was adamant that the hymn he wrote for the choral ending should be reserved for special occasions, and so he later wrote an orchestral arrangement to re- place the vocal parts. Ancient Tales of Wisdom: Old Tiger and a Greedy Traveler A New Frontier in Classical Music Ancient Tales of Wisdom: A Glimpse of Mozart Ancient Tales of Wisdom: The Elves and the Envious Man