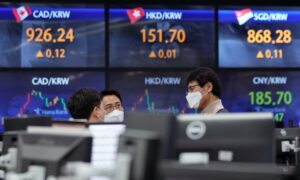 Benchmarks declined in Paris, London, Frankfurt, and Tokyo but rose in Shanghai.

U.S. shares dropped a day after the Federal Reserve said it’s preparing to begin raising rates next year to fight inflation, and traders were also considering moves by other central banks.

The Bank of Japan said Friday it would reduce some of its pandemic support measures, reducing purchases of corporate bonds to pre-crisis levels after March. It also extended by six months extra support for lending to small companies. But its board meeting otherwise kept ultra-loose monetary policy mostly unchanged.

“Japan’s economy has picked up as a trend, although it has remained in a severe situation due to the impact of COVID-19 at home and abroad,” it said in a statement. It noted continued risks from the pandemic and supply chain disruptions.

On Thursday, the Bank of England became the first central bank among leading economies to raise interest rates to fight inflation. The European Central Bank still plans to trim its pandemic stimulus, but not abruptly.

The decision by Japan’s central bank’s decision was “striking dovish” compared with other central bank moves, Marcel Thieliant of Capital Economics said in a commentary.

He noted that, unlike other major economies, inflation is not a big concern. The BOJ has been trying and failing for years to attain an inflation target of 2 percent.

“The upshot is that the Bank of Japan will remain among the few central banks that won’t tighten policy for the foreseeable future,” Thieliant said.

Hong Kong’s Hang Seng lost 1.2 percent to 23,192.63. The Shanghai Composite index gave up 1.2 percent to 3,632.36. Tensions between the U.S. and China were in the spotlight after the U.S. Congress approved legislation barring all imports from China’s Xinjiang region unless businesses can prove they were produced without forced labor.

It was the latest measure intensifying U.S. penalties over China’s alleged abuses of ethnic and religious minorities in the western region, especially Xinjiang’s millions of predominantly Muslim Uyghurs. The Commerce Department also levied new sanctions targeting China’s Academy of Military Medical Sciences and its 11 research institutes that focus on using biotechnology to support the Chinese military.

Worries over property developers caught short in a campaign to reduce surging debt levels have also weighed on Chinese shares. On Friday, Shimao Group Holding’s shares sank 4.9 percent after Fitch Ratings downgraded it to BB from BBB minus.

The downgrade was driven by weak sales and financing conditions that have become unfavorable due to the company’s cashflow situation, it said.

The sell-off followed a rally the day before when the Fed signaled plans to speed up its reduction in monthly bond purchases that have helped maintain interest rates low. The shift in policy sets the stage for the Fed to begin raising rates sometime next year.

With interest rates poised to rise, investors are rethinking the high valuations they have put on tech giants.

Rising numbers of omicron variant coronavirus infections are also casting a shadow as public health experts have begun urging greater precautions and warning of a worsening wave of COVID-19 outbreaks.

The yield on the 10-year Treasury fell to 1.42 percent from 1.43 percent late Thursday.

In other trading Friday, U.S. crude oil lost 85 cents to $71.53 per barrel in electronic trading on the New York Mercantile Exchange. It gained $1.31 to $72.38 on Thursday. Brent crude, the basis for international pricing of crude, fell 89 cents to $74.13 per barrel.