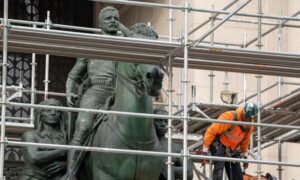 A statue of President Theodore Roosevelt was removed from outside of a major New York museum on Jan. 19 after officials decided that the way it was structured is racist.

The statue, created by James Earle Fraser, was placed just outside the American Museum of Natural History, located in the Upper West Side neighborhood of Manhattan, in 1940. It depicts Roosevelt astride a horse with a Native American man and an African American man on each side of him.

Officials said the composition of the statue was racist and voted in 2021 to remove it.

“The Statue has long been controversial because of the hierarchical composition that places one figure on horseback and the others walking alongside, and many of us find its depictions of the Native American and African figures and their placement in the monument racist,” staffers at the museum said in a memorandum requesting the statue’s removal, which prompted a unanimous vote by the city’s Public Design Commission.

Theodore Roosevelt IV, the great-grandson of the former president and a museum trustee, supported the removal, saying that the statue doesn’t reflect his relative’s legacy.

Crews dismantled the statue on Jan. 20, packaging it for transportation to North Dakota.

The New York museum has agreed to a long-term loan of the statue to the Theodore Roosevelt Presidential Library, which is set to open in Medora, North Dakota, in 2026. Officials at that museum said they find the statue to be problematic, but will work on creating a display that would accompany it.

“Museums are supposed to do hard things,” Edward F. O’Keefe, chief executive of the library’s foundation, said in a previous statement. “It is said that ‘those who do not learn from history are doomed to repeat it,’ and our job is to forthrightly examine history to understand the present and make a better future.”

Statues of historical figures were targeted by protesters and rioters in 2020 after the killing of George Floyd in Minnesota, with a number of such statues being toppled. Staffers at the New York museum said they were “profoundly moved” by the movement for “racial justice” that emerged following Floyd’s death.

Since then, a number of statues have been removed, including ones depicting President Abraham Lincoln and Confederate Gen. Robert E. Lee.

A statue of Roosevelt, the nation’s president from 1901 to 1909 and the governor of New York from 1899 to 1900, is still up at the center of the Theodore Roosevelt Memorial Hall, which includes exhibits examining the man’s life.

Correction: A previous version of this article inaccurately described the location of Medora. It’s in North Dakota. The Epoch Times regrets the error.