It’s weird enough that Lori Lightfoot is using “dollar bills” in a weird vaccine stunt, but things got even more bizarre when Twitter users noticed something odd about the couch in her photo.

Let’s face it, we’ve all seen a lot of really kooky stuff when it comes to promoting the vaccine. States have used pizza and donuts to promote a vaccine for a virus that is wreaking havoc on the obese.

How on earth does that make sense? It doesn’t, and that’s part of the problem they’re having, but they don’t realize it.

They’ve also held “lotteries” to get people to take the jab, which is also rubbing sane folks the wrong way – since when do you have to bribe people with a million bucks to take a vaccine for a so-called “deadly virus?”

But that logic doesn’t stop them. The political elites keep peddling the vaccine in bizarre ways.

The latest is this Lori Lightfoot campaign, where she’s standing in a “living room” with the words “GET VAXD” spelled out in money.

It’s an effort to promote getting vaccinated in the comfort of your home and if you do, that “stack” of cash could be yours!!!!! That’s the new marketing campaign from Mayor Lightfoot, and it was a huge fail.

But besides this feeling incredibly creepy, Twitter users noticed something else that was really off-putting. 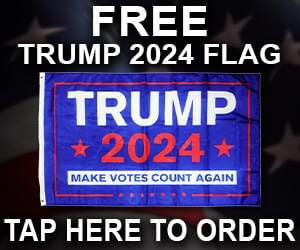 The cushion and armrest on the right are just filthy.

The message is clear. Get vaccinated from the comfort of your home and this stack could be yours 💰💵.

Here’s what people online are saying: “Nothing creepy to see here folks…just the mayor of a huge US city, standing by some money and a filthy sofa”

“use that money to get that dirty couch cleaned!!”

“I don’t know who looks more beat up, Lori or that couch LOL”

“Take the money and get your huge suit tailored”

“She looks like a Batman villain with that money and pose.”

“the reboot of MTV Cribs sucks”

“That ugly dirty couch looks better than she does”

It’s amazing to watch these elites make these incredible blunders and get mercilessly mocked for it.

They really are so out of touch, and social media is shining an even brighter light on it, and exposing them, which is great news for us.